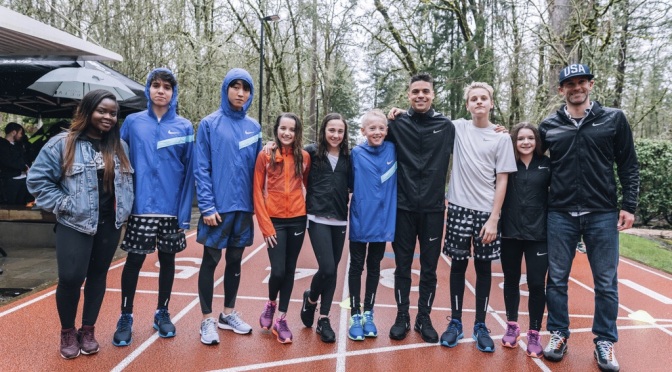 These kids have dedicated a part of their lives to entertain, inspire and motivate other kids. Some of them sing. Some of them dance. Some of them run, play football, soccer, gymnastics and any number of other sports. Some of them open up cool things up and show you what’s inside. They make others smile, get moving, get out. And so many kids today need something or someone in their lives that makes them happy. These kids are that something, that someone.

They came out to the Michael Johnson Track here at Nike’s WHQ. It was raining. It’s always raining here. They were all jet lagged. And they were hungry. Kids are always hungry. They were tired. Tours and walking and listening and more walking will eventually even tire a kid out. But here they were at the track being introduced to a Coach that wanted them to run.

And you know happened? Did they complain or make excuses? Did they ask for shortcuts or whine? Did they say they couldn’t or wouldn’t do it? Nope. They’re kids. So they said “let’s roll”. And when I said in return “get ready to race the Rio Olympic Gold Medalist Matt Centrowitz” did they back down? Nope.

They formed a relay, lined up, ran their hearts out, cheered for each other & took him down. These kids reminded me that all that is great, brave, honorable and pure about us lives within our youth. And we all have those younger versions of ourselves alive within us still. We just need to smile, get moving, get out. We just need to be on more relays together, run our hearts out, cheer for each other, and we too can do impossible things.

We can grow up and not grow old.

When the victorious tribe left the Michael Johnson Track it was still raining and the clouds still blanketed the sky. But I swear the day seemed brighter…and so did the future.